The Most Frequently Used Git Commands

Connect Your Local Repo to Server

Following command will create a new branch with [branch-name] from the current branch. Read More

Switch to another branch

Following command will move HEAD to a branch with [branch-name]. Read More

Following command will create a new branch with [branch-name] from current branch and switch to newly created branch as well. Read More

Use following command to push a new local branch to its remote counterparts. This will create a new branch on remote and set it as a upstream branch for a local branch.

Checkout an existing branch from remote and track it

Use following command to checkout an existing branch from a remote and track it.

Use following command to set up upstream branch for a local branch.

See all branches and its upstream branches

Use branch command in a verbose mode to see the local branch, its current SHA, and upstream branch information.

Get status of changes in a branch

Following command will delete a branch locally and remotely.

Following command will Stage and Commit all changes.

Following command will merge changes of to current working branch.

Fetch and Merge from upstream branch

git pull is a combination of git fetch and git merge. git pull downloads changes from remote repository and merge it into local repository. Read More

Following command will show the differences between source branch and target branch.Read More

Git reset is very powerful command. If used unappropriately, you can lose all your local changes permanently without being saved. Please read about it in detail at Here. This post explains about git reset in detail.

Delete all Untracked files and directories

Git Clean will delete all untracked files and directories from the current working branch.

Use -n if you want to do a dry run and see which files and directories will be deleted. It will not delete them actually.

-n option shows all files/directories to be deleted, but it will not delete it. </br />

In my day to day development activities, these are the most common git operations involved. Please feel free to comment any other git commands which you are using most frequently in your development. 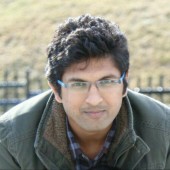 I am a Full Stack Developer. I work with HTML5, CSS, JQuery, Javascript, Backbone, Java, MySQL, nodejs, sailsjs and mongodb. This blog is about compilation of my personal programming experiences for future references. The best part of this blog is to talk with other programmers through the medium of this blog.